This is a chronological time scale of events leading to the realisation of the LAPWD.

This History of LAPWD was written by Sr. Emmanuel Farrelly, Honorary President LAPWD

In order to achieve the aim on which this project embarked the first step necessary was the recruitment of the support of a group of like minded people. To this end all people with disabilities in County Leitrim for whom addresses were known were invited to an initial Open Meeting. Addresses were available through the register of elections of the Council for the Status of People with Disabilities, through personal contacts and through some voluntary Organisations. This meeting was held on the 8th May, 1996. Mr Martin Naughton, well known National Disability Activist, gave the keynote address. Over seventy people were in attendance. The N.R.B. advisor was present in a supporting capacity. A train of events was set in motion.

Subsequent to the initial meeting a small group of eight people met to explore the possibility of establishing a Centre for Independent Living in the county. There was a great spirit of enthusiasm and indeed even of urgency. There was, however much to be done in the way of preparing the way for a lasting partnership into the future. These eight people formed the Core Group and became the nucleus of a new emerging network. Between them they represented a range of disabilities including wheelchair users, people with Multiple Sclerosis, people recovering from a stroke, people with Spina Bifida, people with visual and hearing impairments and one person with a Learning Disability. Through their membership of the supporting voluntary organisations a valuable network route was readily available.

A further meeting of the Core Group was held to which additional known interested people with disabilities were invited as well as the Consultant to the Planning Committee of the newly forming County Leitrim Partnership Board. At this meeting a strong case was made for the inclusion of a person with a disability on the Partnership Board and for a plan that would be inclusive of the needs of people with disabilities. Members of the Core Group were also present at three further open meetings with the Partnership Consultants. On the departure of the Consultant the decision was made that the time had come to put some structure on the work. After some discussion it was agreed to form an official association. An interim committee was formed under the title "Leitrim Association of People with Disabilities" (L.A.P.W.D.) with named Chairperson, Secretary, Treasurer, P.R.O. and Committee members.

Two members of the newly formed committee attended an International Conference on the Independent Living Fund for people with disabilities in Ennis, Co. Clare. This was a very valuable learning experience which served to forge lasting links with the Disabled People of Clare (D.P.O.C.), the organisers of the Conference, D.P.O.C. had organised themselves along the same lines aspired to by L.A.P.W.D. since 1992.

Now that the framework for action was in place in Leitrim the group got down to the serious business of discussing:

Guidance was sought form the Nation Social Service board. It provided valuable sources of information in the form of addresses and contact numbers. The Combat poverty Agency, the Forum for the Status of People with Disabilities and The Disabled Federation of Ireland were also researched. From all the literature it became clear that the way forward was to become a company limited by guarantee. Since the D.P.O.C. was an already established company since 1992 it was decided to invite them to a meeting to share their experiences. This meeting was held in the form of a workshop on 26th of August 1996. In the aftermath of this workshop the group set about:

In relation to funding:

Both of these applications were successful and local business sponsorship was invited on a once off basis. This yielded adequate basic financial requirements.

FÁS very promptly responded to a request from the Centre for Independent Living in Dublin for a Community Development Scheme to provide Personal Assistants for people with significant physical disabilities in Leitrim. The responsibility was on the newly formed committee for putting the necessary structures in place. This involved:

There was much satisfaction with the rate and quality of progress made over the previous eight months. Momentum was stirred up in relation to the legal status of the Association. A sub-committee was delegated the task of drawing up a draft Memorandum and Articles of Association.

A group of three people met to work on the Memorandum on the basis of assistance obtained from Combat Poverty and the D.P.O.C. One person took responsibility for contacting a solicitor and the Companies Registration Office, while another member agreed to print out the completed document.

The draft Memorandum was presented for discussion by the sub-committee Overall aims and objectives were finalised and the future direction of the Association was discussed. It was decided that the time was right to hold a public launch preceded by a widespread publicity campaign, A new sub-committee was delegated the task of preparing for the Launch.

This was a very significant day in the history of this young Association. L.A.P.W.D. was now registered as an employer in its own right and capable of assuming full responsibility for the running of the Centre for Independent Living in the County.

This day has gone down in history as a very significant landmark in the lives of the disabled people of Leitrim. Over one hundred people turned out in solidarity and support. There was an open invitation to all people with disabilities and their carers, assistants, friends and representatives of official organisations and, public agencies, as well as all public representatives. Mr Martin Naughton addressed the gathering as he did at the very first ever such meeting one year previously to the very day. The key-note address was delivered by Mr. Mervyn Taylor who performed the official launch. Part Two (The Book of Evidence) contains full details of this event as published in the local media. It also reveals a flavour of the advertising efforts in the lead up to the official launch. The timing of this event coincided with the lead up to the General Election of 1997. Every effort was made to use this to best advantage in terms of lobbying on behalf of people with disabilities.

30th JUNE 1997 A meeting of the Committee and a number of members of the Association was held to review the Launch experience and to plan for the future development of the group. Decisions were made regarding the frequency of group meetings from this date on and a tentative date was made for the first A.G.M. of the new company. Training and development proposals were discussed and the secretary was delegated to pursue the matter with relevant authorities. An application to the County Leitrim Partnership for funding for a training and development course was proposed. 3rd September 1997 A group of twenty three participants commenced an Extra Mural Certificate Course entitled An Introduction to Community Development in relation to Disability. The participants included all the Officers of the Association as well as twelve other people with disabilities, four carers and a number of PA's and volunteer workers. Through this course it is hoped to raise awareness around disability issues and develop the confidence and self-reliance of the participants and provide them with a range of knowledge and skills which will enable them to:

It also aims to enable the participants to understand the concept of disability and the disabling society while empowering them to play their part in their own development. I trust that the record of following training initiatives: Personal Development courses, Assertiveness, Facilitation, Creative Writing, Painting, Public Speaking etc, Excursions, Advocacy meeting and so on over the years since 1997 have been documented and filed in the office, leading up to and since Millennium Celebration (Comhar 2000). Leitrim people with disabilities claim their own power - LAPWD has a very strong, vibrant life of its own. It is consumers, i.e. people with disabilities and families, who set the agenda - "the customer is always right"! May The Vision Live On!

Official Opening of the Action Ability Centre - 8th May 2008 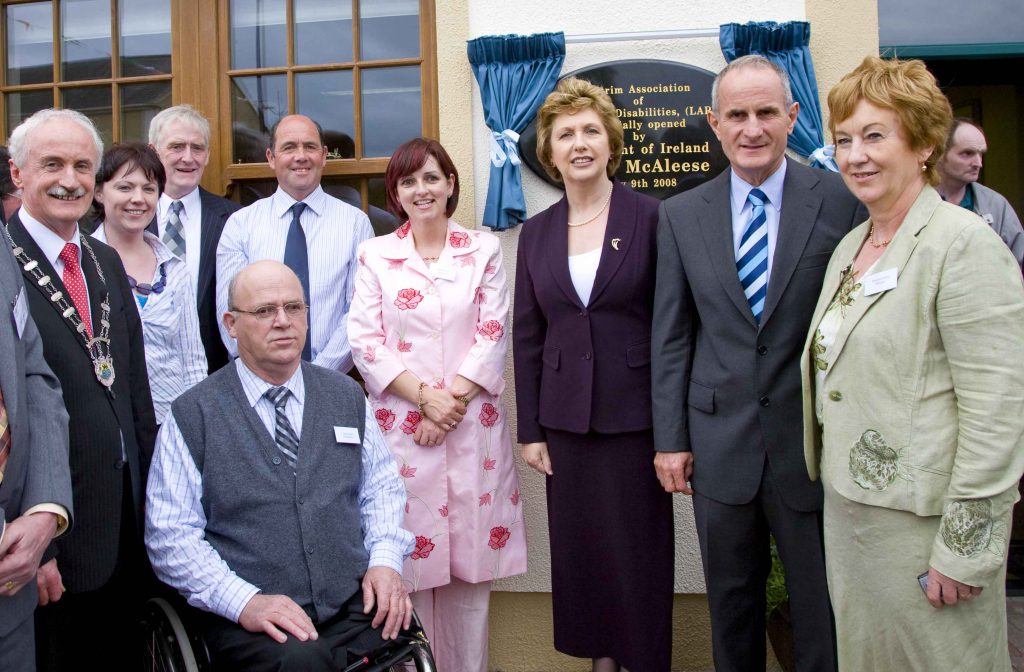 The official opening of our Action Ability Centre was a landmark event in the history of LAPWD, opened by President of Ireland Mary McAleese and her husband Dr. Martin McAleese. The opening of the centre drew a huge attendance of members and representatives of the local community.